Our Madrona Road Challenge items were revealed during our March meeting.  All I can say is "Wow!".

For those of you who may not know, this challenge was presented by The Modern Quilt Guild using Michael Miller Fabrics Madrona Road line designed by Violet Craft.  We were tasked with creating something quilty.  Participating chapters of the MQG received the "boy" or blue colorway, and could then stipulate additional guidelines and dates.  Anyone who completed something quilty could include it in the Flicker pool by January 31st, when Violet would personally pick several winners whose items would be displayed in the Michael Miller booth.

We had so many projects and stories.  I'm going to split this post over several days because there is so much to share.

I'll say it again, if you're not coming to our meetings, you are missing out.  The majority of these pictures do not do justice to the quilts.  There is nothing like seeing the details up close, or touching the fabric, or hearing someone's enthusiasm or frustrations as they present their quilting journey/story.

In no particular order we have:

Wendi, who actually had yardage in the "girl" colorway because she hadn't joined our guild when we received our fabric bundles, made this beauty.  (Ok, this photo is not so good, but you can find prettier photos on her blog, prsd4tim2.)  She decided to participate anyway.  Her quilt is based on the Heximetry pattern from asquaredw. 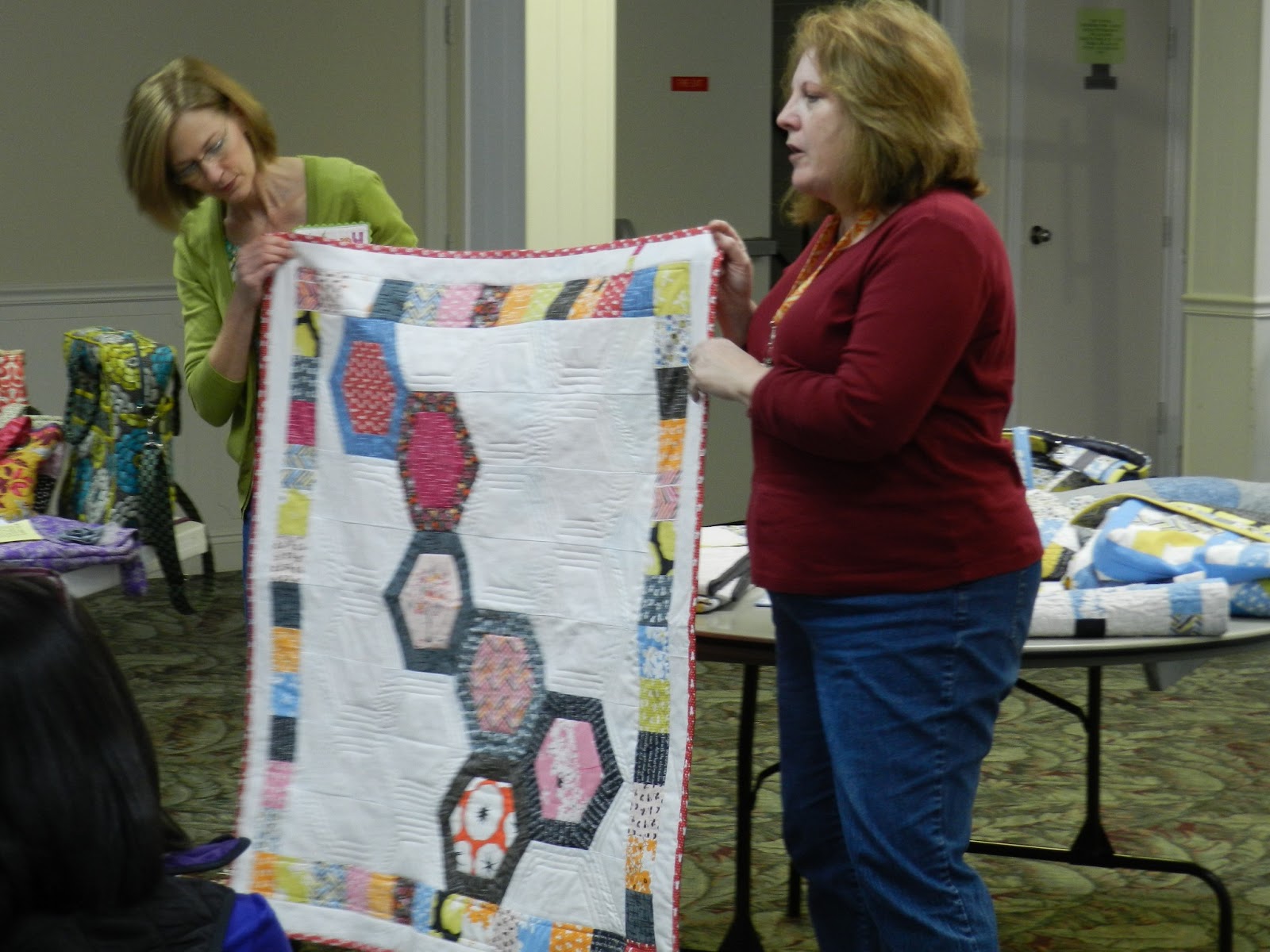 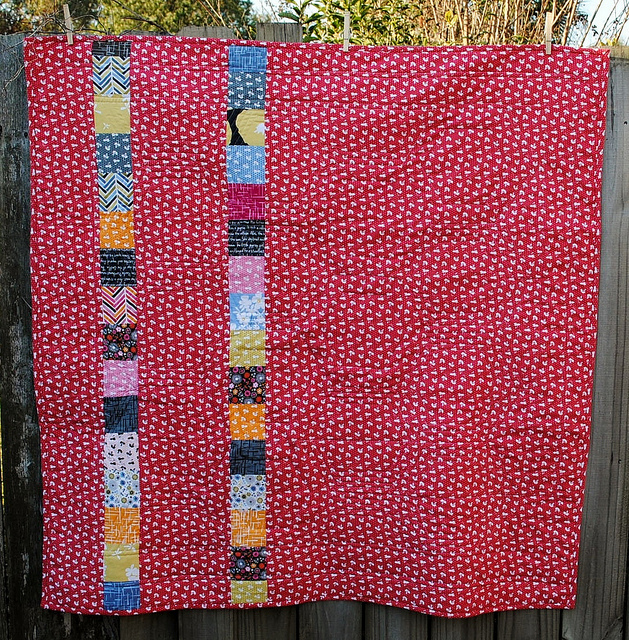 Kim works quick.  In fact, her little baby quilt was finished in time for the national deadline of January 31st and included in the Madrona Road Flickr Pool where Violet complimented Kim saying "I really love the negative space and the quilting - beautiful job!".
It's the Pointed In The Right Direction Pillow tutorial.  (I like how Kim coordinated her sweater to her quilt.  That was planned, right?)

When Kim made this, we had no idea of the connection because...Wendi was an EMail participant only.  She had never come to our meetings.  We, I, found her through a comment on her blog, and the rest is history.  Wendi posted about this interconnectedness, which you can read about here.


Star light.  Star bright.  The first star I see tonight.  This is the prayer wish my children recite every night as I tuck them into bed, so Kira's quilt holds a special place in my heart.

Kira based her design on an older wonky star tutorial from Silly BooDilly.  The fact that Kira covered the corners of her center block and really ex-ten-ded her star points, makes it all her own.

When she first posted photos to Flickr, one of the best comments was how this looks like "a big wonky mama star with her baby star nearby".  I totally agree.  Look at those mama's arms reaching out to snuggle and protect her baby. 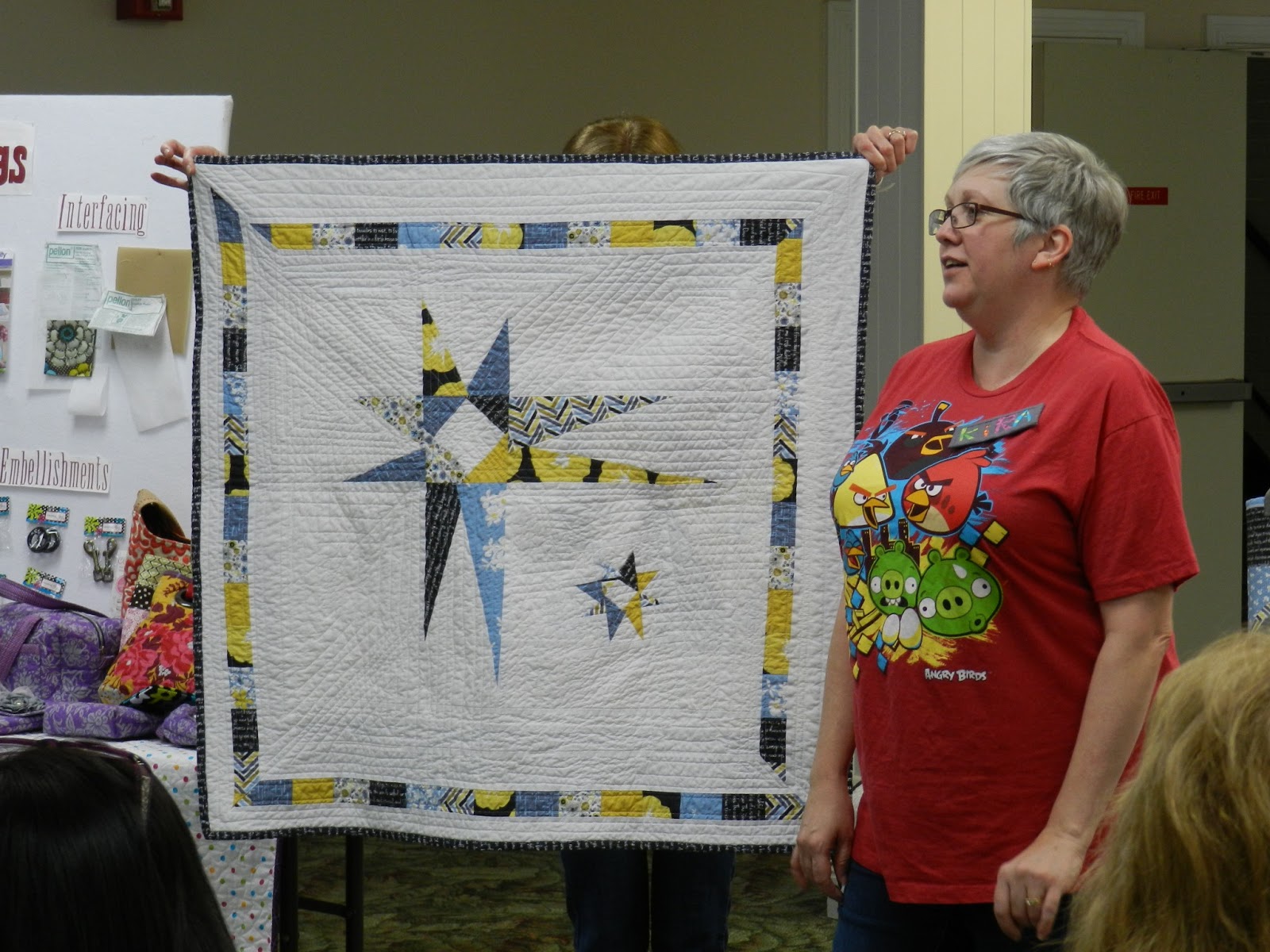 This improv pieced back is COMPLETELY out of Kira's comfort zone.  Simply because she ran out of white fabric.  What's a girl to do?  Improvise of course, with leftover scraps.  Love it!  That back is as beautiful as the front. 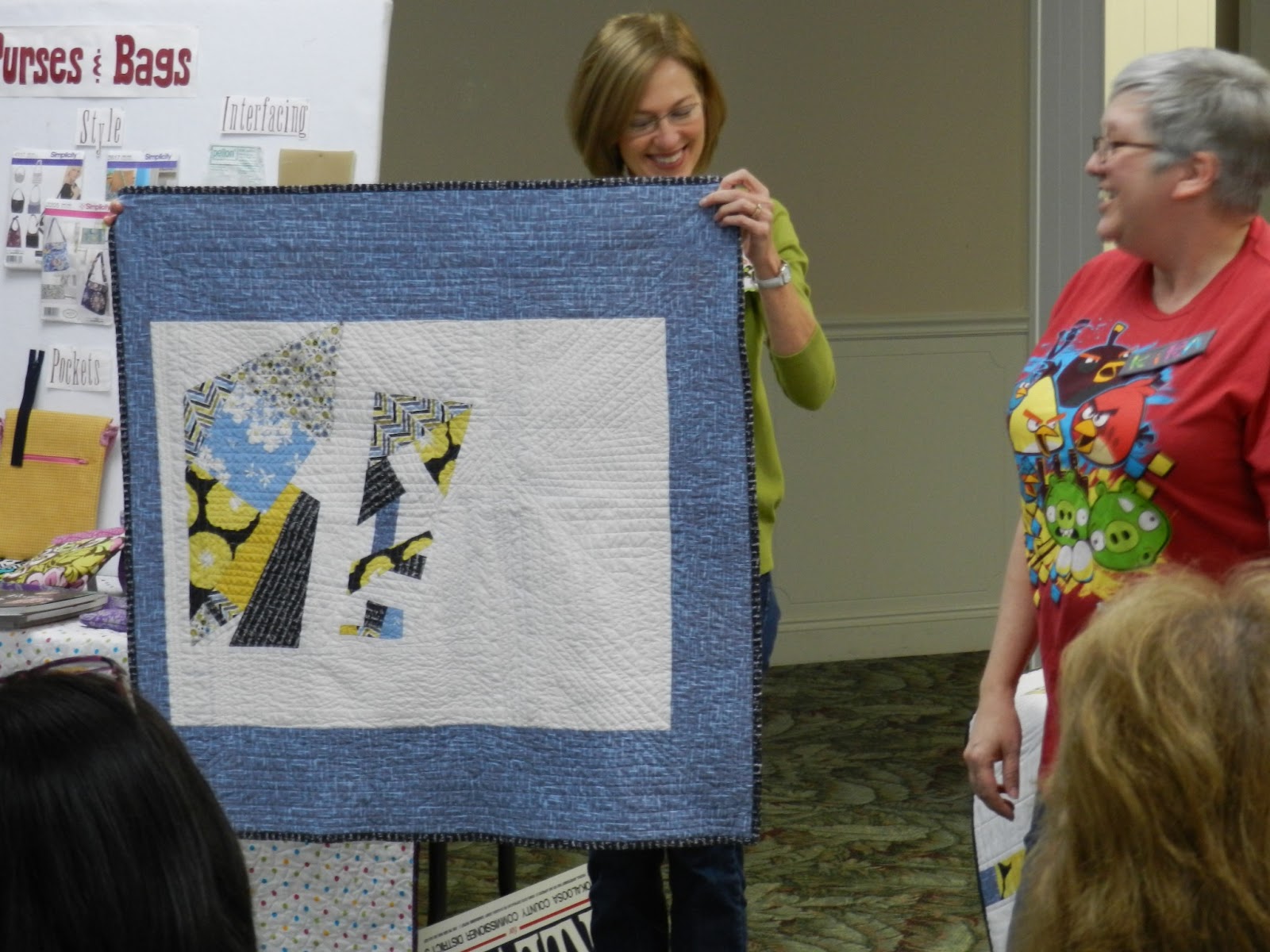 My tote bag was completed the morning of our reveal.  Yeah, nothing like  procrastinating, and then sewing, until the last possible moment.  Even though Bobbi and I had purchased additional yardage from our LQS, The Sewing Center Around the Block, during the January Support Your LQS event, I didn't cut any fabric until two days before our meeting.

No particular pattern was used.  I was inspired to make wonky, improv circles, because of the name of the fabric line  - Madrona Road - and because of my own experience that so many of our choices in life, while seemingly random, end up being connected.  My favorite print, Memoir, was omitted from the improv circles so that I could feature it. 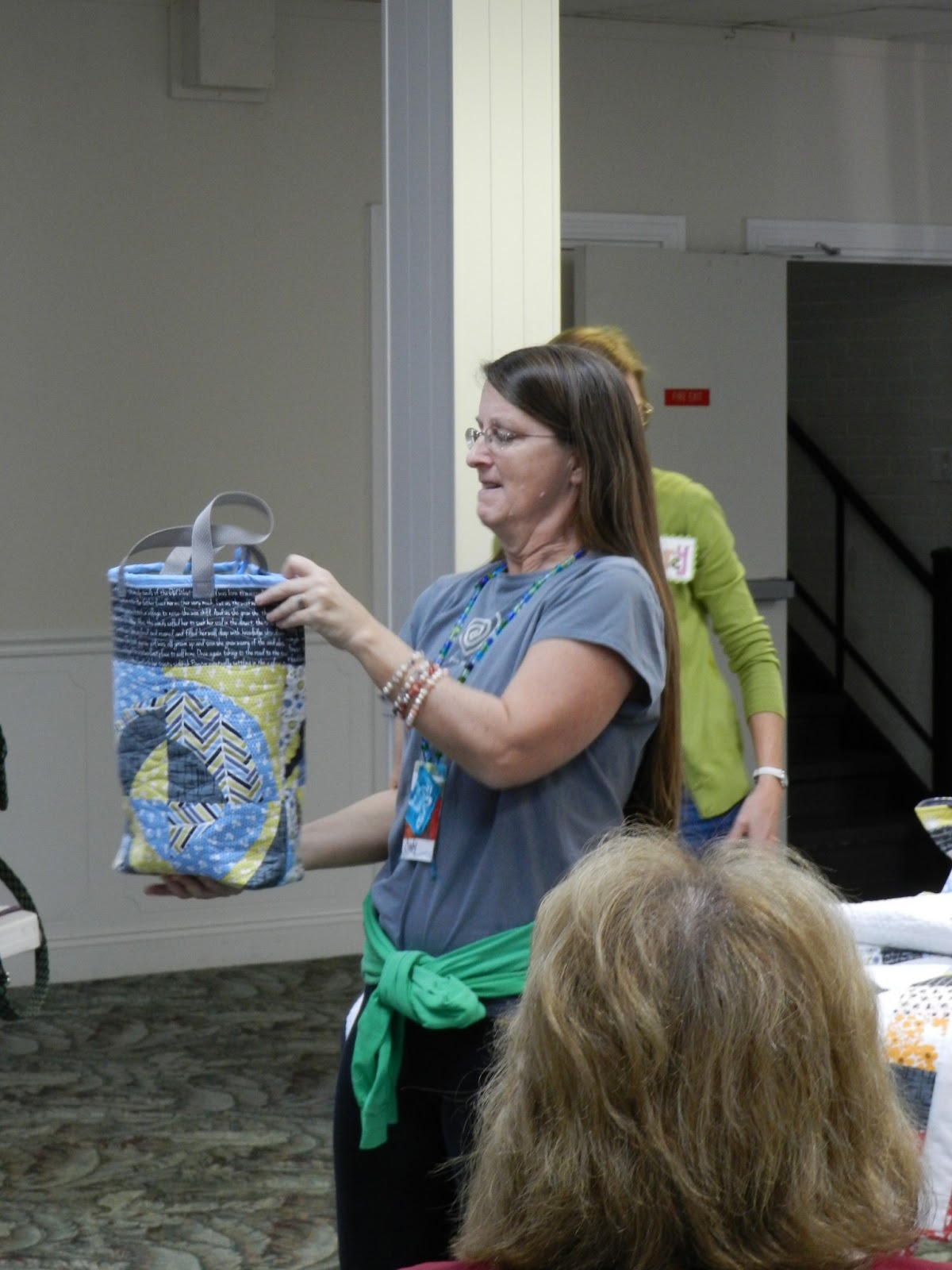 All of my wonky improv blocks were constructed with a stack-slice-swap method that I've absorbed from reading Jan Mullen's Cut Loose Quilts and Kathryn Schmidt's Rule-Breaking Quilts books so many times. 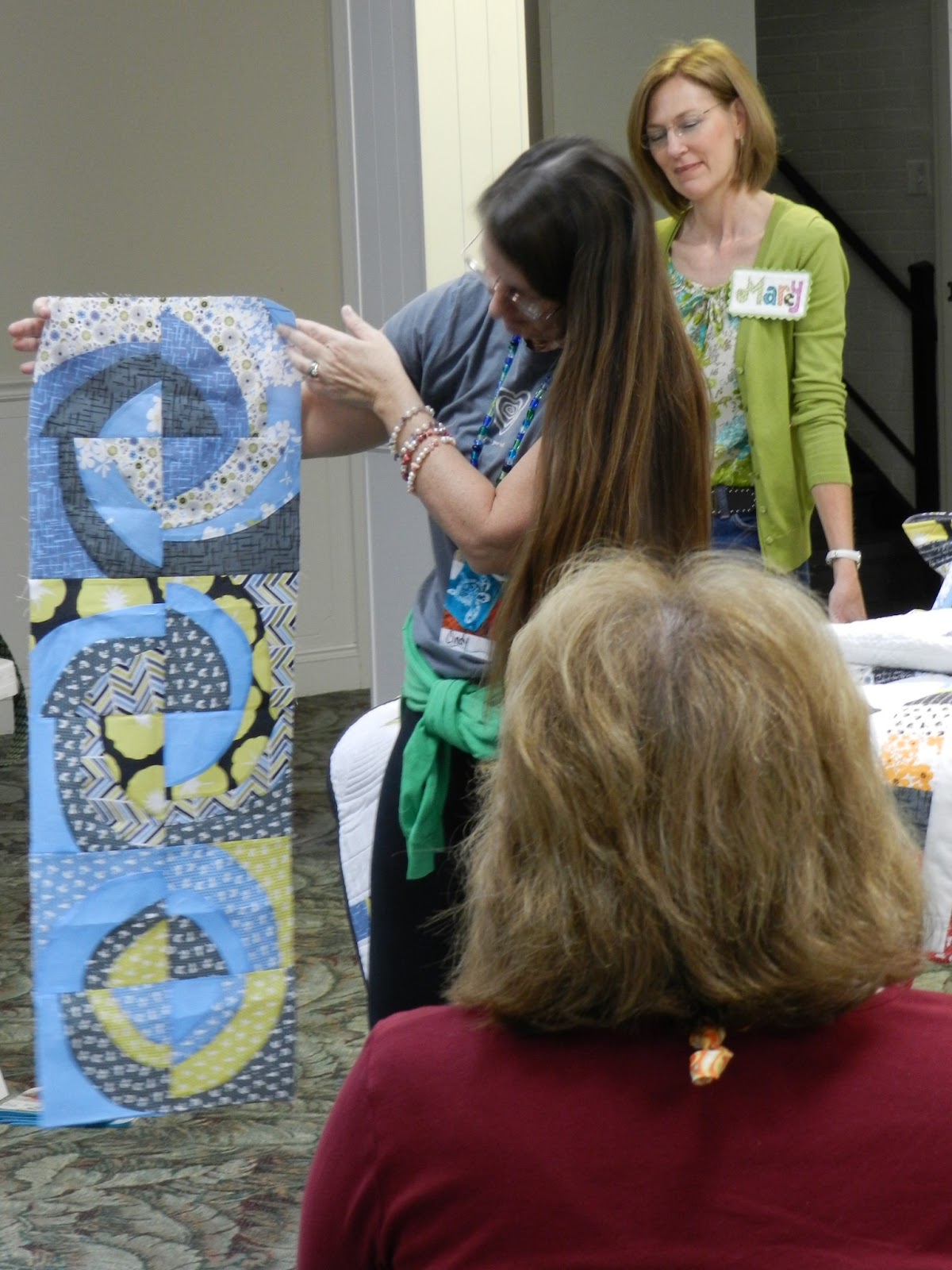 Gina's LOVe letters WIP.  We learned during this reveal, after she had pulled these from the display table because it wasn't a "completed project", the last time she'd been able to sew was during our February 9th meeting and sew day.  As the tour de force for the 2013 Emerald Coast Quilt Retreat & Show, we totally "get" why sewing didn't happen for her.  Next time Gina. 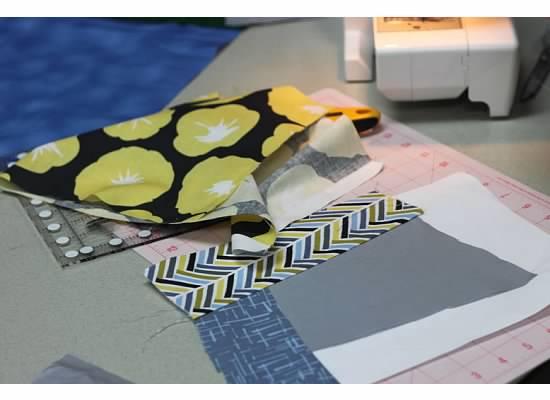 Betty's tote bag was designed using her accuquilt GO! kitties die.  She used strip piecing and applique and quilted it with a random meander stipple. 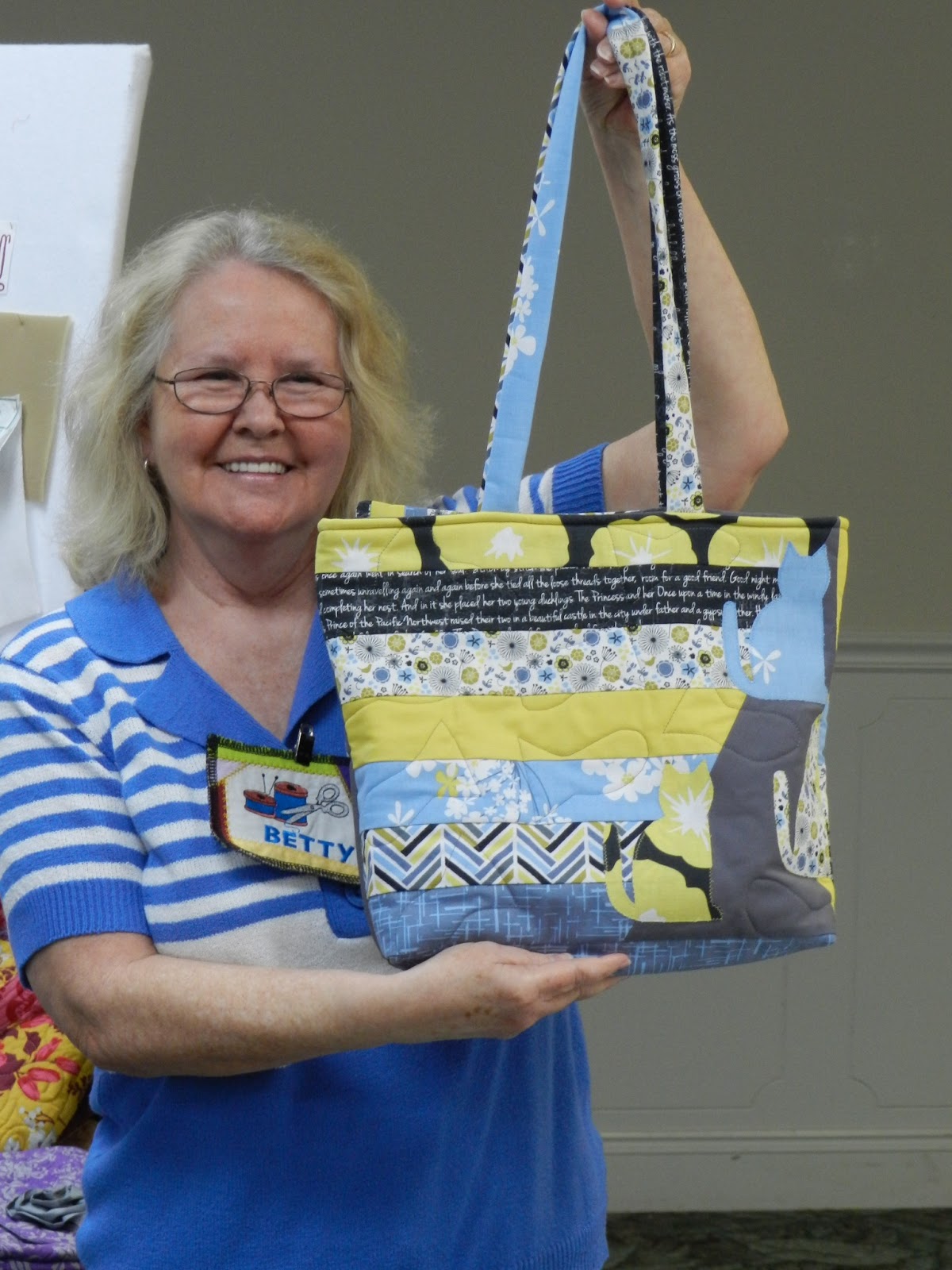 Early in her "playing with fabric" phase, she was unsure if this was going to be a pillow or a tote bag.  I hope she has enough fabric left for a pillow.  I have it on good authority that several people want one.

I wonder if Betty knew that Violet is a kitty fan? 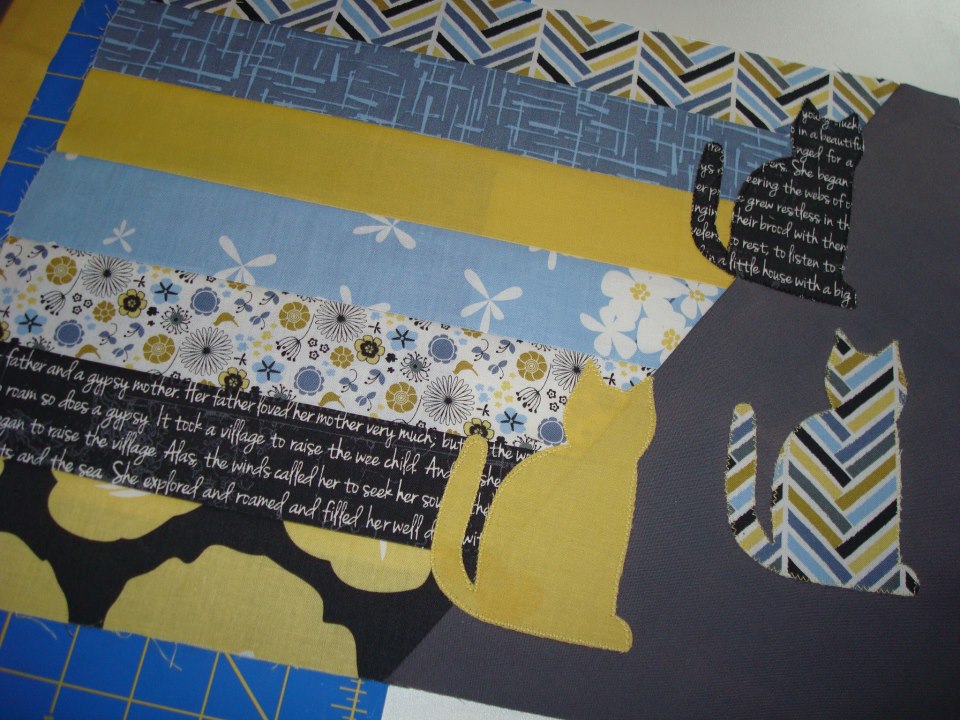 Again, see what you're missing by not coming to the meeting and sew day?