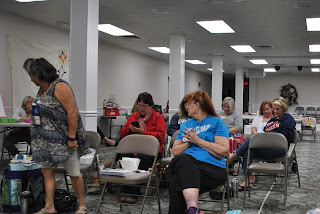 The November meeting of the Emerald Coast Modern Quilt Guild was held on Saturday, November 12, 2016 at First Baptist Church of Crestview.  Cindy called the meeting to order at 10:20 am.  Cindy asked for a moment of silence for a positive thought.

Cindy welcomed all members present.  There were no guests.

The Quiltcon Fabric Challenge is due November 30, as are quilts being submitted to the QuiltCon Quilt Show for judging.  There was a general discussion of QuiltCon, which will be held in Savannah, Georgia on February 22-26, 2017.

Natalie noted that this meeting is the Annual Meeting of the Emerald Coast Modern Quilt Guild.  She announced that Kira had resigned from the ECMQG Executive Board on October 15.  This meeting is therefore being held according to the by-laws, as we have a quorum present consisting of 3 of the 4 board members.  Natalie also noted that according to the by-laws, a quorum is a majority of the members present at the meeting.  There were 18 members present.

Natalie gave a brief "State of the Guild" message.

Natalie presented a proposed budget based on dues of 40 members.  Even with the increase in dues, the budget shows a deficit of $561.  However, we do have additional funds in the bank to cover the shortfall.

The Election of Officers was then held.  Cindy noted that nominations were held at the October meeting.  The board had contacted those whose names were proposed to determine their willingness to accept the nomination.  A slate of officers for 2017 was presented.  Natalie will remain on the board in the position of past president.  As per the by-laws, Gina and Jo volunteered to count the ballots representing the general membership, with Natalie as the board representative.

Cindy discussed the benefits of our MQG affiliation, including monthly webinars, monthly modern quilt patterns, a monthly block of the month, fabric challenges, discounts to events at QuiltCon, and more.  Check the email from MQG on November 2 for a complete list of MQG member benefits.  Cindy noted that the November quilt pattern from MQG  contained a limited palette and alternate gridwork.

There was a discussion of Committee positions for 2017.  Cindy noted the old adage that "many hands make light work" and asked for everyone to take an active role in the guild in 2017.

There was a discussion of the shortfall in the proposed budget.  Gina suggested an opportunity quilt to be sold at the Mattie Kelly Arts Show next fall. 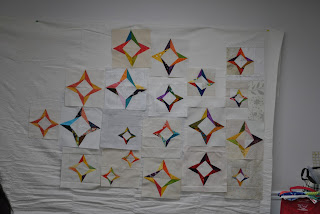 There were 20 foldstar blocks submitted for the block lottery.  Cindy won the blocks.  Thanks to Jill for being our block lottery presenter in October. 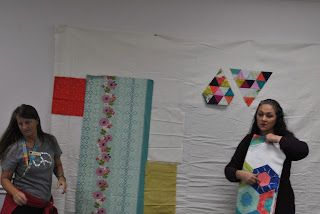 Amy presented the block lottery block for January.  This block is 3.5" (finished) triangles using a specific inspiration fabric from Cotton + Steel (2014 Mustang Border Print.)  The fabric includes several colors which we can use to complete the palette for our triangle blocks.  Amy showed several options for completing a quilt using triangle blocks.  She noted that it was best to use an equilateral triangle ruler (60* angles) but that the ruler should square off the seam allowance to make the triangles easier to sew together. The finished block should measure 12-1/4".   Amy suggested using a dry iron to prevent the bias seams from stretching.

Wendi announced that our 2016 bees should be finished.  If you are missing blocks, please email Wendi about receiving an angel block.

Gina announced that she will be holding a retreat in Destin in January 2017.  Diane Holman is the featured teacher.  Contact Gina for more information. 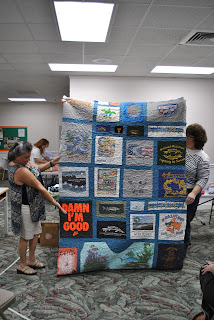 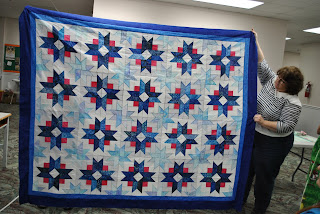 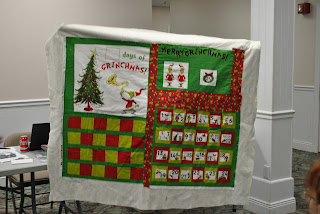 After lunch, we had our first Chair Sale.  Several members brought items to sell. 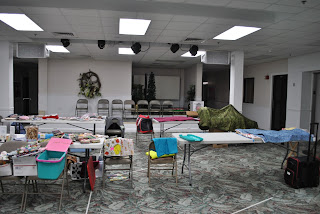 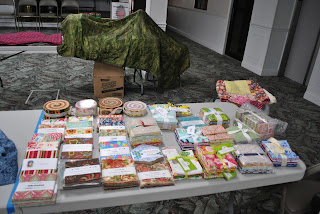 At the conclusion of the Chair Sale, our regular Sew Day was held.