Cindy, our secretary and blogger, missed our July meeting so I (Kelly) will be writing this post.  If you're reading this and missed our meeting as well, know that you were missed, and we hope to see you again soon!

Our July meeting had a great turnout.  If you've been with us for a while, you'll know that our Guild has grown substantially in the last several months.  We used to average about 10-14 people at meetings, with about 19 paid members.  I believe now we're at about 40 paid members, with about 20 people attending the meetings!  Wow!

Since we have had such growth recently, and so many of our new members are new to the concept of modern quilting, I thought it would be good to go over exactly what modern quilting is, and how it compares to traditional quilting.  It was a last minute decision, so I had to scramble to put together a presentation.  Thankfully, my friend Melissa (who founded the Front Range MQG in Colorado) gave me permission to use her PowerPoint presentation she made on this very topic a while back.  I also used a presentation that Cara from the St. Louis MQG put together, also a while back, that showed pictures of quilts that would be considered traditional, followed by modern versions of those quilts (I don't know Cara, but she posted the link to this presentation on Flickr a year or two ago, which is here if you missed it).  This is a very visual subject, so I was thankful to use these visual presentations to get my point across.

The first thing I really wanted to get across was that we're not trying to change anyone's tastes, or exclude anyone from our guild who might consider themselves more traditional.  Everyone is welcome in our guild!  The main reason for this presentation is to show what we expect for projects that represent our guild as a whole.  We want things from our guild to read "modern."  So everyone should feel free to bring in traditional projects for Show and Tell at our meetings...we can all appreciate and respect the work that goes into quilts - whether it's a traditional or a modern aesthetic...but if we're making a charity quilt, or working on blocks for our Block Lottery, or making items for a booth at a craft fair, we'd like for people to step out of their comfort zone and make things modern.  Modern is what sets us apart from other guilds, after all!

The definition of modern quilting, taken from the MQG website is this:


Modern quilts are primarily functional and inspired by modern design. Modern quilters work in different styles and define modern quilting in different ways, but several characteristics often appear which may help identify a modern quilt. These include, but are not limited to: the use of bold colors and prints, high contrast and graphic areas of solid color, improvisational piecing, minimalism, expansive negative space, and alternate grid work. "Modern traditionalism" or the updating of classic quilt designs is also often seen in modern quilting.

I emphasized that most of us in the ECMQG who would call ourselves modern quilters, would line up more with the "modern traditionalism" mentioned in that last sentence - we take a traditional block or quilt pattern and make it modern in some way.

Next I talked about modern quilting roots, showing pictures of Gee's Bend quilts.  Then came Melissa's and Cara's slideshows, then I showed my own slideshow showcasing a few popular modern fabric designers, as well as trends in modern fabric.

The point I ended the presentation on was this:  fabric is everything!  When it all boils down, fabric choice is what can make a quilt modern or make it traditional.  So it's important to become familiar with modern fabric designers, and try incorporating solids into our quilting.

I hope I made sense, even though this was all put together very last minute!

As usual, we had a time of Show and Tell.  Here are some pictures from that... 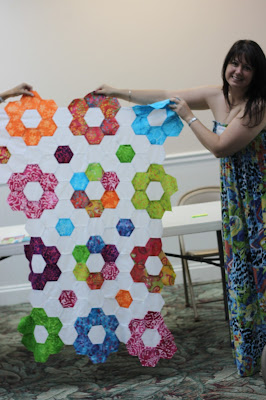 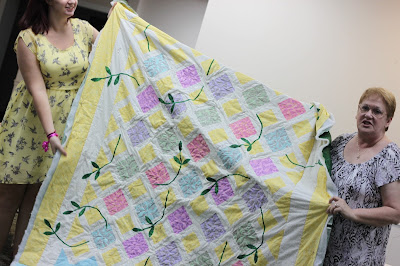 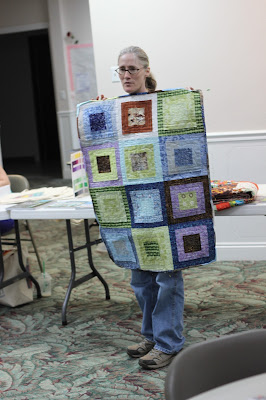 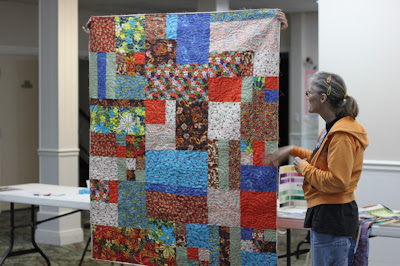 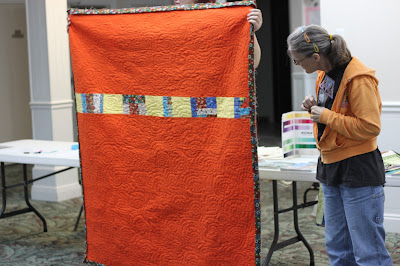 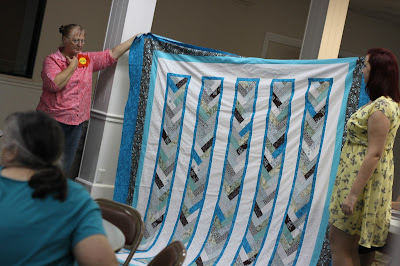 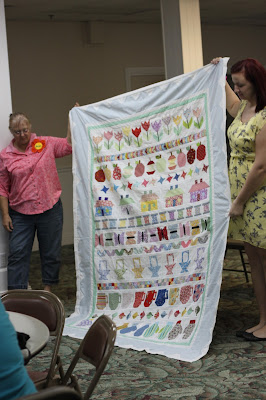 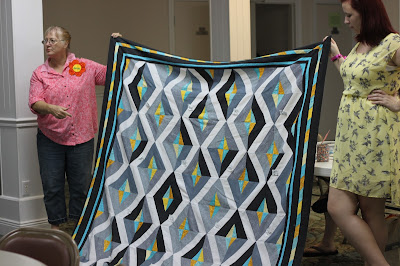 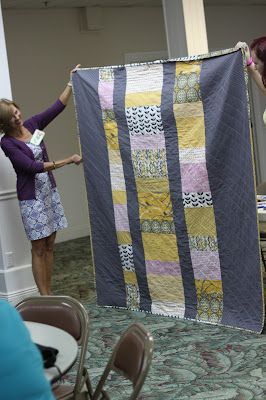 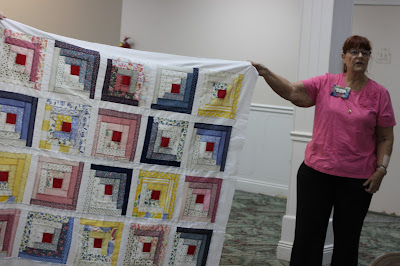 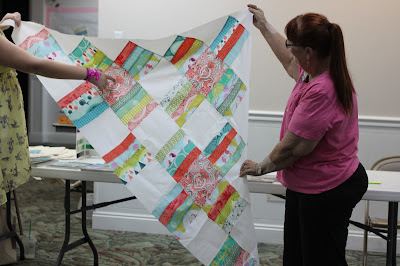 Moving on to other guild business...

We had our first ever block lottery this month.  People were asked to make 12" string blocks, then if you made a block, to bring in $1 to turn in with the block.  At the meeting, we drew a name from everyone who turned in a block and $1 to see who would take home all the blocks.  All in all, we had something like 38 blocks turned in!  And Susan - who is a new member, as well as a new quilter - won the blocks.  We witnessed a very sweet moment when she won, because the very first block she ever made was in that group of string blocks, and she didn't want to let it go.  So when her name was called, she became very emotional and was so excited to actually win the blocks!  We were all very happy for Susan. 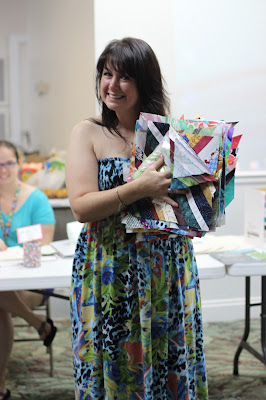 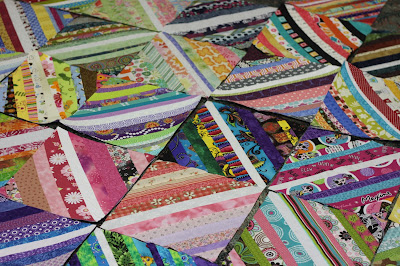 Marcy, our President, suggested that since Susan won, she could choose what August's block would be.  Susan chose stars.  So here's what  you need to know:

-Blocks should be 12.5"
-The background must read gray, whether it be solid, tone-on-tone, etc.  You can use "50 shades of gray," meaning the background does not have to be the same shade gray all over, and we don't have to use any specific gray.  Just as long as it reads gray.  Gray.  That's the key word!
-The star can be either a pop of one color, or several colors can be used.
-Stars can be wonky or straight, paper pieced or not paper pieced, simple or intricate.  As long as it's a star!
-The block can consist of one star or multiple stars

If you need some inspiration, go to Flickr and simply type in "star block" in the search box.  Additionally, Kira mentioned that Quilter's Cache has several star block patterns and tutorials, so that's another good place to be inspired by.

Bring in those star blocks to the August meeting, along with $1 for every block made (you can make more than one).  Let's have fun with this, and remember to use modern fabric.  If there are any questions, don't hesitate to ask!

We also talked about our upcoming annual Scrap Swap.  We've had two of these before, and they're always a big hit.  Here's the details about that:

-Bring in a ziploc sandwich bag full of the scraps of your choice - whatever you'd like to see something made out of.  It can even be a charm pack.  It's really up to you - whatever you can fit into a ziploc sandwich bag.
-At the August meeting, we'll put those scraps into brown paper bags and have a blind swap.  Everyone who brought in scraps will choose a bag.
-After you select a bag, find the owner of the scraps to find out what they would like made out of the scraps.  Some people might not have a preference, and others might be very specific.  Regardless, we like to keep these items small, since we're working with a short timeline and scraps.  Some ideas are potholders, mug rugs, a mini quilt, pillow covers, etc.
-You have one month to make something with these scraps.  Bring them back to our meeting in September (which is also our 2 Year Anniversary!) and give the completed item back to the original owner of the scraps.
-Since we're only working with scraps, you may add an additional fabric - but only one!  You may use as much of this additional fabric as needed, but please, only one additional fabric.

Those are the guidelines!  As usual, if there are any questions, please ask.  If you'd like to see some of our previous Scrap Swaps - here's our first one and then our second one.

The great thing about this kind of swap is that you're sure to be happy with what you receive, because it's something made out of your own fabric!

For our August presentation and demonstration time, we're going to shake things up a bit.  Everyone is encouraged to bring in their favorite tool to show to the Guild and talk about why you like it so much.

I won't be at the August meeting, and I happened to have my favorite tool with me, so I took a minute to show it and talk about it.  It's the Martelli RoundAbout - a cutting mat that's on a turntable base, which comes in handy for things like trimming half square triangles.  I love this mat so much!  And I love that it's a Martelli product, which is local to us (Pensacola).

That's my favorite tool...what's yours?  Bring it in and tell us why you like it so much!

Our sew times are usually a time for us to work on our own projects.  However, during the August Sew, we thought it would be a great time for us to work on items to be sold in a Craft Fair, coming up at the end of October.  So if you have something in mind that you'd like to work on to make several of, bring in whatever you need to make that.  If you don't have anything in mind, I think we'll have some patterns for people to use, so just bring fabric and tools!  A few of us mentioned that smaller items sell better at these craft fairs, like pouches, luggage tags, potholders, stuffed animals, etc.  Also, since the Fair is in October, seasonal items (fall, Christmas, etc.) tend to sell very well.  There will be an option to include things in the Craft Fair booth that will be sold to raise money for the Guild, but there will also be an option to sell things and raise money as an individual.  We'll go over all of this in more detail as the Craft Fair approaches.

We hope you'll join us in August!