The show and tell portion of January's meeting gave us 15 projects to ooh and aah over.

Elaine was first with a novelty mini-quilt.  Remember, she is a nurse.  This was a gift from  friends. 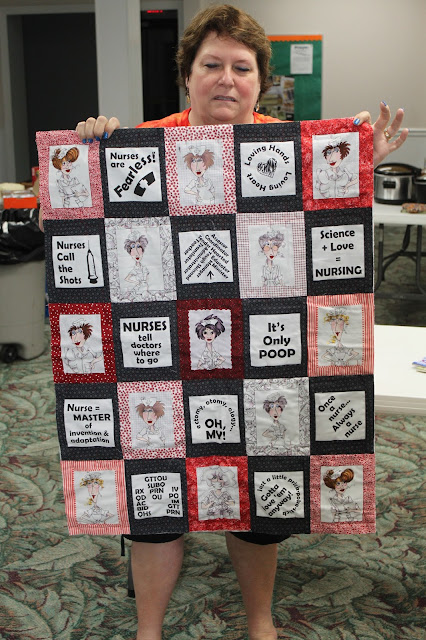 The second item she showed is her mom's traditional paper-pieced quilt.  Elaine had fixed a wonky border and will quilt it. 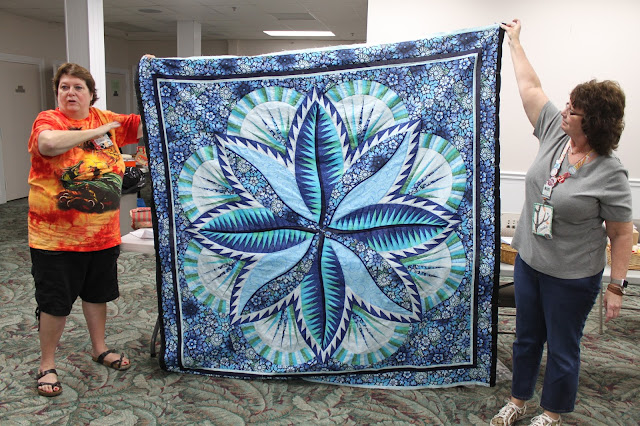 Natalie had four items to share, although we're only showing pictures of three.  The mini-quilt she's making for the MQG MQS at QuiltCon East can not be shown.  It's a surprise!

This is Natalie's applique using a non-boring background. This is from a class quilter Pat Sloan taught last year at the Flying Needles Quilt Retreat. 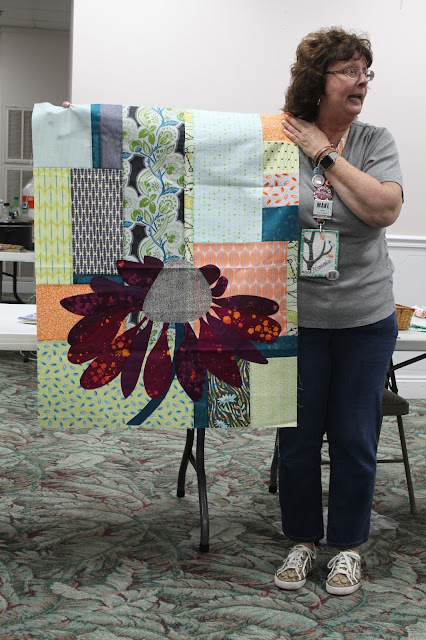 Next is the floating squares score from the book by Sherri Lynn Wood, The Improv Handbook for Modern Quilters. It is made with three different sizes of squares and a background/filler fabric. 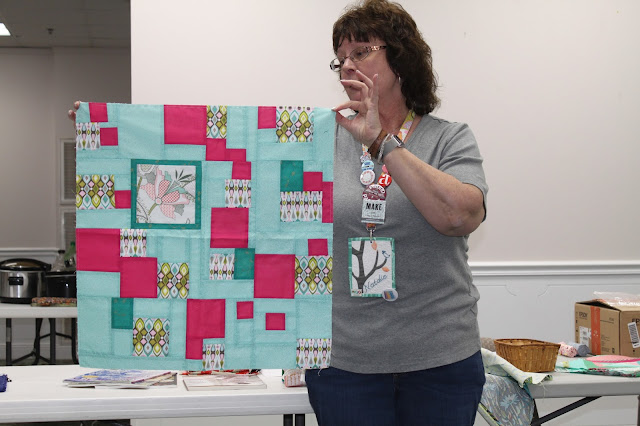 Natalie's third project was another mini, also a score from the same book, this time being String Squares composed of prints, and dark and light solid fabrics. 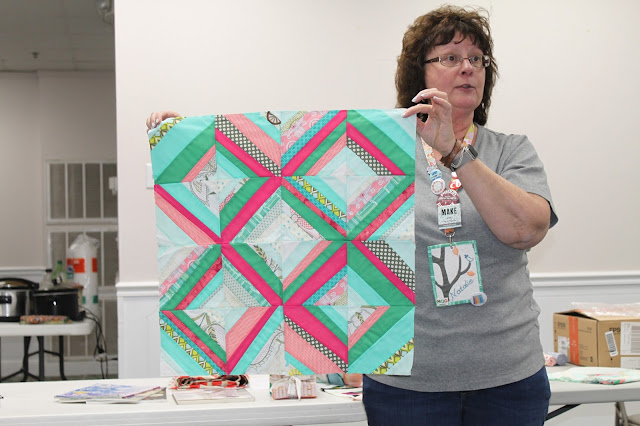 Mary showed two projects.  The first is a Stacked Squares baby quilt in grays and blues made with leftovers from a quilt she made for her daughter. 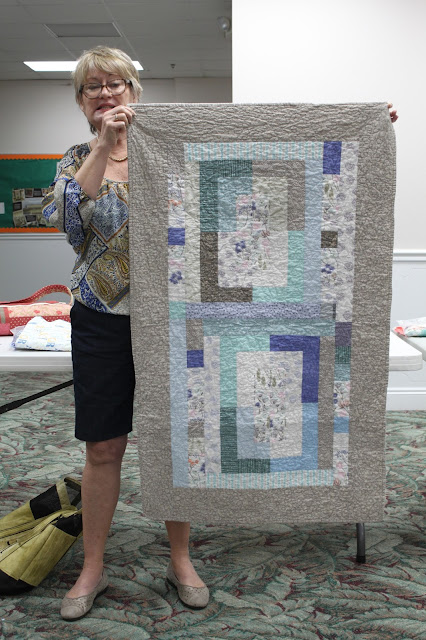 Mary's second item was a monogrammed mesh bag.  (Sorry, we don't have a good picture.)
Apologies to Amy, who is our photographer, for not having pictures of the quilt she showed and the shark fin blanket.  We did manage to take this picture of the mermaid tail blankets (big and doll size) she made for her granddaughter. 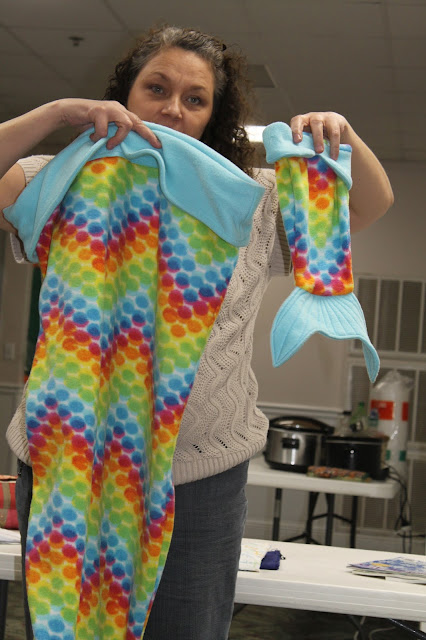 Kim showed two quilts that had been UFOs for too long.  Both were recently finished because she rented longarm time at a Quilter's Place. 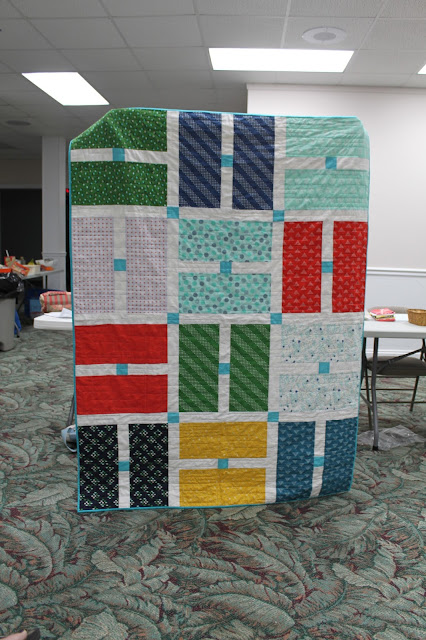 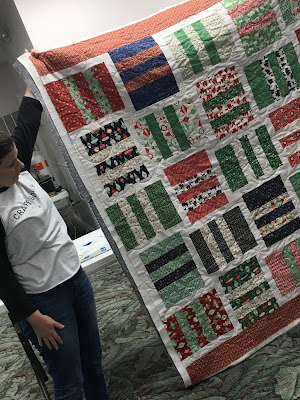 Roxie's two projects couldn't be more different.  She's been working on two Christmas quilts - one made with traditional fabrics (darker colors; small scale florals; not much contrast) and laid out in a very traditional design that included sashing and borders, and the other made with modern fabrics (brighter colors; whimsical prints; colors that contrast).

Maureen had the last project shown; we think she called this a "recliner quilt" because it was designed for her husband's favorite spot.  Made from scraps, old flannel shirts, and additional thrifted flannel shirts, it is long and narrow. 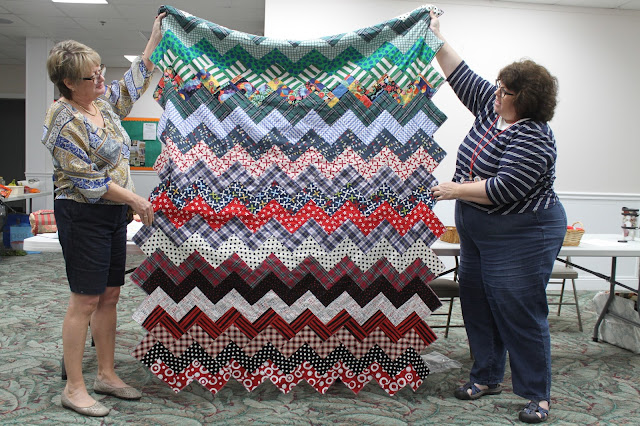 The best surprise is the pocket on the back for his feet!  Everybody wants one!! 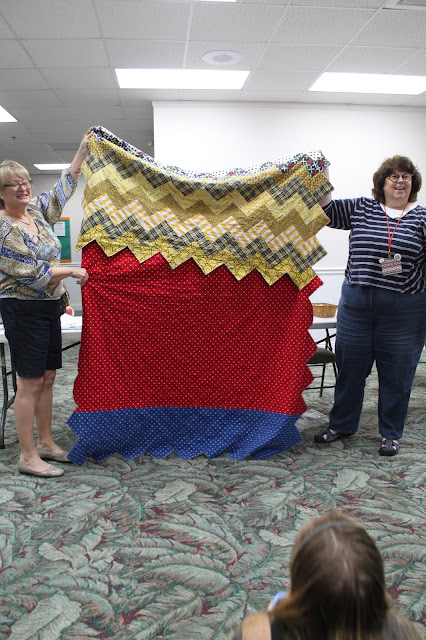 That was January's Show and Tell.  Thank you everyone for sharing your creativity!
Email ThisBlogThis!Share to TwitterShare to FacebookShare to Pinterest
Labels: January 2017, Show and Tell